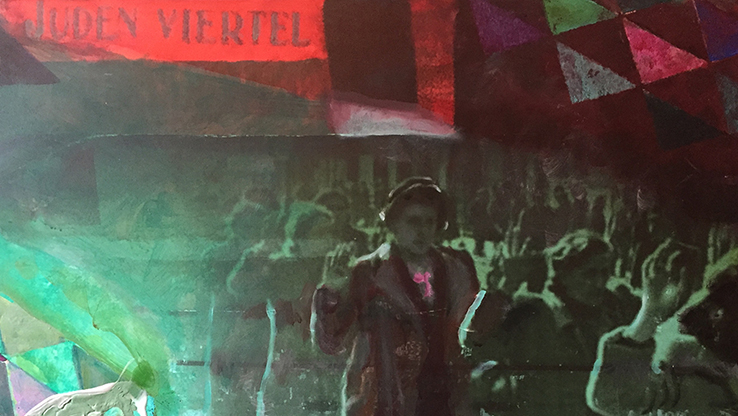 The Reinwardt Academy exhibits the interactive work Troubled Waters. This installation is part of the public art route Art Stations of the Cross which takes place in Amsterdam until 22 April.

Art Stations of the Cross is a unique public art project that brings together art and religion. It takes visitors on a creative and contemplative journey through Amsterdam, using the story and symbols of the Passion to reflect upon contemporary injustices. The Reinwardt Academy exhibits the interactive work Troubled Waters.

Past and present
Troubled Waters deals with oppression faced by women in Amsterdam, in both the past and present. During World War II, thousands of Jewish women were herded together and deported to concentration camps, as shown in the left wall panel. Today, women are also put in dark trains, boats or trucks without knowing what awaits them when they disembark. The right panel shows these young women, victims of trafficking who are forcibly employed in the sex industry.

Videos and soundscapes
The installation by Dutch American artist Yona Verwer and Polish American artist Katarzyna Kozera is interactive; through iPads and smartphones you can watch short AR videos and listen to soundscapes. The soundscape for the Holocaust panel, composed by Dan Schwartz, utilizes ambient sounds recorded at locations where the famous February Strike of 1941 against the German occupation took place. The other panel is accompanied by the electro-acoustic composition Dark Forces by Alon Nechushtan.

Other locations
Art Stations of the Cross aims to provoke the passions: artistically, spiritually, and ethically. The project has travelled across the world raising awareness for those in need of refuge and compassion. Past exhibits took place in London, Washington and New York. Other locations on this year’s Amsterdam route are the Church of Saint Nicholas, the Amsterdam Museum, the Moses and Aaron Church, the Singel Mennonite Church, Paradiso, Museum Our Lord in the Attic and the Old Church. Admission is free.