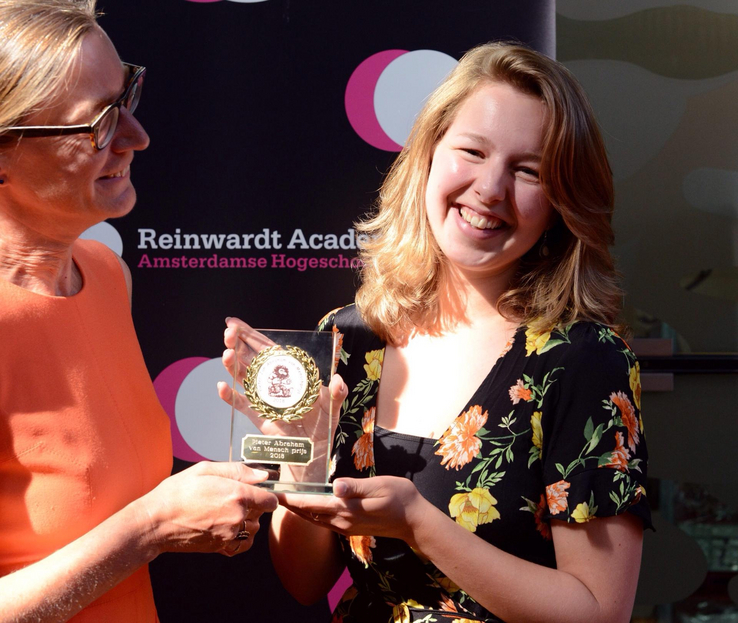 Esther Graftdijk, who graduated from the Bachelor in Cultural Heritage, is the winner of the P.J.A van Mensch award 2018 for the best graduation research. Esther will receive the award for her research Tussen Hoop en Sloop! Een kort verhaal (Between Hope and Demolition! A short story).

For her graduation project, Esther mapped out the differing emotions and interests surrounding a church that had to be closed. She incorporated her findings into a beautifully written story with two different endings. It is up to the reader to determine which end will be the reality, according to Esther, who writes about her choice of narrative form: "A story is a tool for visualising pictures of the future. The situation with the church has reached an impasse, which the various parties do not appear to be able to resolve. Due to this deadlock, we are not able to make any progress. That is why it is also good to look to the future. Which scenarios exist and what do they look like?"

Jury report
The jury, as well as the professors Hester Dibbits and Riemer Knoop, were struck by the originality, creativity and sensitivity expressed by the work. The scenario approach offers an important, innovative contribution to the quest of contemporary heritage professionals with regard to how one should operate in heated debates about a concrete heritage item, such as a vacant church. It is a quest which the professors are occupied with, together with teachers, students and relevant parties from the field, and within that context this graduation project connects the two major projects of the research group in an inspiring way: the emotion networks project and the street values project. As a creative work, brimming with passion, which was written based on a sense of social urgency, the publication beautifully illustrates the position that the Reinwardt Academy occupies within the Amsterdam University of the Arts.

The jury chose the project from a top four of 32 projects that were assessed with a score of 8 or higher. The other three nominees were: Veerle de Boer with the publication Including Queer, Sophie Boven with the publication De tegenwoordige tijd in beeld gebracht (The present day identified) and Mike van der Steenhoven with his Letter of recommendation regarding Catawiki's antiquities policy.

The Pieter Jan Abraham van Mensch award
A graduation project that is eligible for this incentive award of the Reinwardt Academy makes an inspiring contribution to the current heritage debate.  In addition, the winning research demonstrates originality and the author has a passionate and forward-looking vision on the subject. The award is named after Peter van Mensch and is the successor to the Samuel van Quiccheberg prize that he set up during his time as former professor of the Academy. The professors Hester Dibbits and Riemer Knoop form the jury of the award.